This Red House Furniture ad was produced as part of our I Love Local Commercials Series sponsored by MicroBilt ( )
--
Nominate your favorite local business for a FREE local commercial at: Watch all of our RhettandLinKommercials and see who's been nominated!
--
Pre-qualify for financing right NOW at:

Thanks to all of the guys at Red House for being such great sports. Help em out by referring a friend in the High Point NC area, or drop by the store yourself to meet Richard, Johnny, and the gang!

To address any controversy around this video, watch our video response (or read the transcript below):


We knew this video was going to be controversial. Anytime race is discussed in any capacity, controversy ensues. The racial reconciliation concept was a joint effort between the Red House staff and us. They pointed out the fact that their employees and customer base were like the "Rainbow Coalition", and we thought something with a comical racial reconciliation theme would be fun, as well as a conversation starter.

For those of you who think this video is racist, we'd like you to distinguish between "racist" and "racial". Racism is "hatred or intolerance of another race or other races." Racial is "of, relating to, or based on a race". This video is very obviously racial as opposed to racist. This video doesn't promote or feature hatred or intolerance. Rather, it's the very opposite. This commercial promotes inclusion and reconciliation, if not in a comical way. To point out the obvious, the irony in this video is that it's completely ridiculous for people to relate furniture to their race. People of all colors are welcome at the Red House, which is something that is taken for granted today, but there was a time in the not-so-distant past during which things as simple as a water fountain were NOT for everyone.

If Saturday Night Live, Mad TV, or Dave Chappelle for that matter, were to address racial issues in a comical way (something that they all do VERY regularly), they would have pushed the envelope MUCH further.

Discussing race in the US is taboo. It always makes people feel uncomfortable. We think it's a shame that someone saying "I'm white" or "I'm black" creates such a stir. There are real cultural identities within different people groups, and these things should be celebrated and embraced, not swept under the rug.

This video is an attempt to use humor to spark a discussion about race issues, because we still have a long way to go. 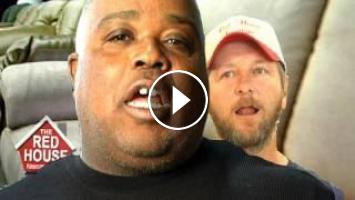 This Red House Furniture ad was produced as part of our I Love Local Commercials Series sponsored by MicroBilt ( ) -- Nominate your favorite local bus...